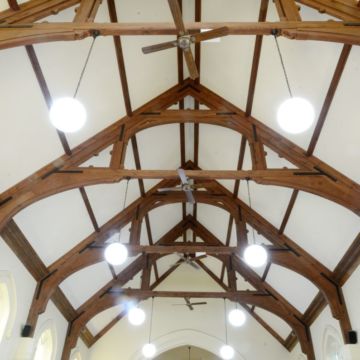 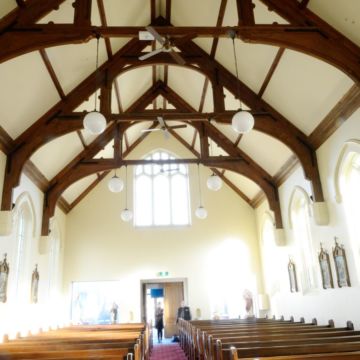 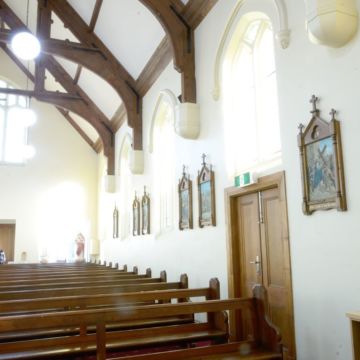 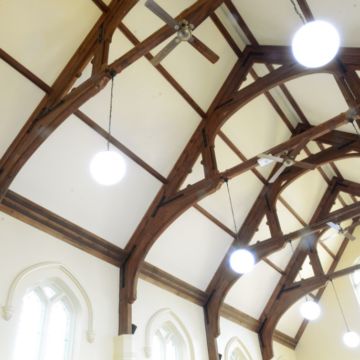 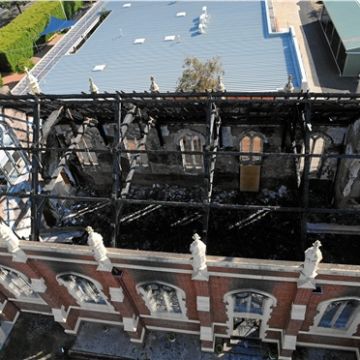 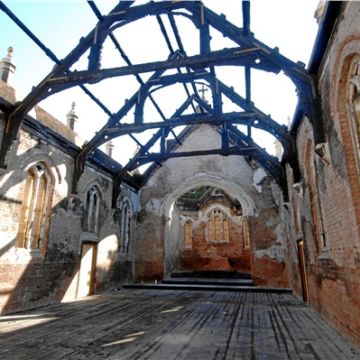 We used these products

On April 8, 2009 St Brigids Catholic Church in Ballan, Victoria was destroyed by fire caused by an electrical fault. The interior of the church was gutted, though the original trusses were burnt but intact. This is one of benefits of using timber in the event of a fire. Because timber chars slowly, engineers are able to calculate the burn time of timber before it becomes structurally unsound.

There were no plans of the original building, so the architect Tony Lyon worked off old photographs and memories to redraw the building keeping with its 97-year-old heritage.

Vicbeam were contacted to rebuild the trusses to as close as the original design as possible. The steel plates made by a blacksmith were salvaged from the wreckage and reused. Given that the steel was almost a 100 years old and handcrafted, however, there were a few peculiarities in each of the plates, they were not all identical. We had to adjust and manipulate each truss to suit.

Using GL13 Radiata Pine Glulam beams, we manufactured the timber and assembled the 4 trusses. The trusses included intricately carved timber that had to be precision made and then installed.

Andrew Wallace and a team assembled and installed the trusses on site.   Tim Wallace recalls

Being up on the scaffold installing the intricate infills, Dad (Andrew) dropped his glasses and they went bouncing down the scaffold. I went down to look for them and a lens had popped out. I searched and searched and finally found that they had landed in the little bowl at the entrance where the priest would put the ‘holy water’. We had a good laugh thinking that Dad’s eyesight was now blessed.

20 Months after the fire, the church was reopened in time for Christmas 2010.

The rebuild was estimated to have cost 1.3 million dollars

Some of our other projects

or send us a message

and our friendly staff will be in touch

We are still operating, however, as part of our safe work practices during COVID-19 we have a variety of measures and policies in place to ensure that workers are safe and complying with health authorities. We appreciate your support and patience in continuing to comply to the current regulations during these uncertain times. Please continue to chat with us through emails and phone calls.